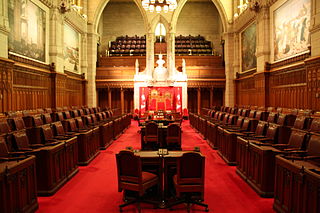 In our last post about the Senate, we looked at the general structure of the modern Senate, with an emphasis on how it conforms to some of the original goals set by the founders in 1867. Today, we look at the modern make up of the Senate:  who’s in it, how did they get there, and how can their term come to an end?
Today, in 2013, who can become a Senator?
As was the case in the past, today any Canadian citizen – by birth or naturalization – who is at least 30 years of age can become a Senator. That citizen must reside in the province from which they are appointed. As well, s/he must still have at least a $4000 net worth and own or have equity in $4000 of property in the province of appointment.  Today $4,000 may not seem like much money, but in 1867 it was a considerable sum. Best estimates are that its present-day dollar value would exceed $70,000, but Parliament has never adjusted this amount.[1]
Although these property requirements do not usually cause a problem, they can on occasion. Senator Mary Alice “Peggy” Butts, who served from September 23, 1997 to August 15, 1999, was a Roman Catholic nun when she was appointed. Having taken a vow of poverty upon becoming a nun, she was only able to officially be sworn in only after her order formally transferred a small parcel of land to her name. [2]
These qualifications for property and residence do not only matter when you become a Senator, but throughout one’s term. At the start of each legislative session, a Senator has to file a Declaration of Qualification with the Clerk of the Senate stating s/he continues to meet the qualifications.
Are there any other qualifications required?
The exact wording of section 24 of the Constitution Act, 1867 says that the Governor General shall “summon qualified Persons to the Senate”. Until 1929, only men were considered to be persons qualified to be Senators.
In 1927, five women in Alberta (Henrietta Muir Edwards, Nellie McClung, Louise McKinney, Emily Murphy and Irene Parlby) challenged that interpretation. They petitioned the federal government to ask the Supreme Court whether the Constitution gave the Governor-General the power to appoint women to the Senate. The Supreme Court was asked, and replied no. Fortunately for those women, the Judicial Committee of the Privy Council in London, and not the Supreme Court, was Canada’s highest court at that time. The Privy Council disagreed with the Supreme Court and ruled that women were indeed “Persons” that could qualify to be Senators. Shortly after, in 1930, the first female Senator, Cairine Wilson, was appointed by Prime Minister Mackenzie King.
At the moment, there are 38 women serving as Senators.
How does a “qualified” person get chosen?
Senators are still appointed by the Governor General, in the name of the Queen. The Governor General acts customarily on the advice of the Prime Minister, so, effectively, Senators are appointed by Prime Ministers.
There are no constitutional rules regarding past experience or party affiliation. Previous political experience is common but by no means a prerequisite to becoming a Senator, and many Senators continue to be selected based on achievements in their professional field.
As noted in our previous post, when the first Senate was selected in 1867, the Senators were selected from the provincial legislative assemblies and there was equal representation from government and opposition parties. Since then, Senators have been appointed from such fields as business, law, education, public service and journalism. Some worked previously as civil servants, some used to be cabinet ministers, some are former party leaders.  For a list of the various occupations that have been represented in the Senate, see here.
Prime Ministers usually have chosen Senators affiliated with their own political parties. Occasionally, individuals without a party affiliation are selected and may sit as Independents. More rarely, Prime Ministers have selected Senators from opposition parties.
In the last three decades, Brian Mulroney selected 2 out of 57 senators from outside his party – one Independent and one Reform.  Jean Chrétien made 75 appointments and selected 3 Independents. Paul Martin selected 17 Senators, 2 of which were Independent Conservatives and 3 from opposition parties. 59 Senators, more than half of current Senators, have been appointed since Stephen Harper became Prime Minister in 2006.  They have all been Conservative members.  A list of which current Senators were appointed by whom can be found here.
Arguably, an ideal Senate would have a more even distribution between the two dominant political parties (as one of the original goals was that it not be very partisan). However, some argue that it is a good thing to have the Senate majority be the opposite to the majority in the House of Commons (so as to increase accountability). These are questions better left to the political scientists.
Are Senators appointed “for life”?
No. Senators used to be appointed for life, but, since 1965, Senators have been required to retire at age 75. This provision can be found in section 29(2) of the Constitution Act 1867.
How many Senators have died while in office?
Many, especially during the days when Senators were appointed for life. The last Senator to die in office was Doug Finley, a Conservative Senator from Ontario, who passed away on May 11, 2103.  For a complete list, see here.
Can Senators resign?
Yes, just like in any other job, a Senator may also resign (and some of that has occurred lately).  The reasons for resignation are as numerous as in any other profession. The provisions about resignation can be found in section 30 of the Constitution Act 1867.
A Senator can also choose not to resign outright, but instead resign from the party s/he was associated with and sit as an independent instead. Some that has been going recently as well.
For a complete list of senators and how they left the Senate, see here.
Can a Senator be disqualified from Senate?
Yes. The provisions around this are contained in section 31 of the Constitution Act 1867.  Specifically, “[t]he Place of a Senator shall become vacant” if s/he:

Finally, a Senator could be disqualified if he or she is “attainted of Treason or convicted of Felony or of any infamous Crime”.
To complete such a disqualification, Senators would hold a vote. In other words, it’s up to senators to police themselves.
What does it mean to be attainted of treason? Convicted of a felony? And what exactly is an infamous crime?
Felonies are what we now refer to as indictable offences, which are the most serious criminal offences, and treason is a specific indictable offence.
An “infamous crime” is not defined in the Criminal Code. But it would likely be a crime that would call into question their morality or trustworthiness in relation to holding public office, such as fraud, corruption, or dishonesty.  As noted by Robert Marleau, former clerk of the House of Commons and co-editor of House of Commons Procedure and Practice, published in 2000:  “[t]hat phrase ‘infamous crime’ was written in another time and another context. […] What I would say is both the criminal law summary indictment or criminal code has evolved since those phrases were used.”
Can Senators be sanctioned in any other ways (for example: before a conviction)?
Yes, the Senate can also suspend Senators, or authorize a leave of absence. The provisions regarding these options can be found Chapter 15 of the Senate Rules.
With respect to leaves of absence, these provisions state that, the Senate may order a leave of absence where, in its judgment, there is sufficient cause, and solely to protect the dignity and reputation of the Senate and public trust and confidence in Parliament. This can occur, for example, when a Senator might be under investigation for a crime.
During such a leave of absence,  a Senator still has the right to work as a Senator outside of the Senate chamber, but s/he cannot attend sittings. However, since Senators will be disqualified if they miss two consecutive sessions, Senate rules say that, if required to avoid disqualification, the Senate could allow the Senator in question to attend a sitting just once every session.
Most recently, this has occurred with Senator Patrick Brazeau, who was placed on a leave of absence while he stands accused of assault and sexual assault. Senator Brazeau was also removed from the Conservative caucus and is now an independent (and would be sitting as such if he were not on a forced leave).
Suspensions, on the other hand, generally occur when a Senator has been found guilty of a criminal offence in proceedings by indictment and is given a sentence other than a discharge. Such a suspension would continue in force until the earlier of:
(a)   the finding of guilt is overturned on appeal;
(b)  the sentence is replaced with a discharge on appeal; or
(c)   the Senate determines whether or not the seat shall become vacant by reason of that conviction.
This has never occurred.
How do the current Senate hearings regarding the suspension of 3 Senators fit into this?
This is a question which has yet to be determined. The motions in question appear to want to do more that any traditional “suspension” (in that the Senators in question would no longer be permitted to continue their work and would be stripped of salary and benefits), but the requirements for “disqualification” do not appear to have been met. From what has gone on in the red chamber thus far, it appears that there is discussion about questions such as:

Stay tuned…should be interesting.
More to Come…
Well that was quite a bit of information! In our next post, we will look at what Senators do and how that work does or does not reflect of the goals of the founders of confederation.

[1] http://www.parl.gc.ca/About/Senate/Today/sens-e.html. These requirements for appointment are found in section 23 of the Constitution Act 1867.
[2] Interestingly, Senator Butts also donated her entire salary to charity.