Question of the month from the Garvie Reading Room:
Can my landlord prevent me from displaying an election sign supporting a particular candidate? 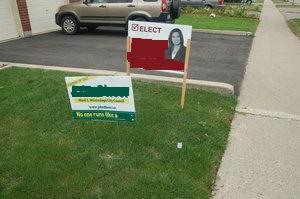 This depends on the type of election. Both the Canada Elections Act (S.C. 2000, c. 9), section 322, and the Alberta Election Act (E.1, RSA 2000), section 135.5 state clearly that no landlord may prohibit a tenant from displaying election advertising posters on the premises nor may any condominium corporation prohibit any owner or tenant from displaying such posters. They do allow the landlord or condominium corporation to set reasonable limits on the size or type of posters and to prohibit such displays in common areas of the building. Common areas are usually those areas that all tenants can access, like the laundry room, parking lot and land surrounding the building.
However, the Alberta Local Authorities Election Act (E-21, RSA 2000), which governs municipal elections makes no reference to election advertising at all, other than to prohibit such displays at polling stations on election day. Many municipalities have bylaws or regulations related to campaign signs on municipal property and roadways. Generally they have no regulations about private property but do caution that placement of signs on private property must have the permission of the property owner. This would imply that in a municipal election the landlord can refuse for a tenant to display a campaign poster or ask a tenant to remove a sign that has been posted. There may even be a term in your lease governing such displays.
Because each province governs both their own elections and their municipalities, these rules may well differ in other provinces.

Question of the month from the Garvie Reading Room:
What are the rules about riding a pocket bike in Canada? Can I ride it on the roadway or on sidewalks?

The governing of motor vehicles is a shared jurisdiction: provincial and territorial governments regulate and enforce the licensing, operation, modification and maintenance of all vehicles using public roads while Transport Canada controls the importing of vehicles and motor vehicle safety standards.
Because the rules about what types of vehicles are allowed on public roadways are set by provincial and territorial governments there is not one answer for the whole country. Following are three examples of the rules in three different provinces.
Information for BC comes from the Insurance Corporation of British Columbia who advise that “Mini motor vehicles, commonly referred to as “pocket bikes” or “mini choppers,” do not meet federal safety standards for use on public roads. Their use is limited on public roads to designated parade routes. The reason that these vehicles aren’t generally allowed on public roads is because they don’t meet minimum height specifications for headlamps, tail lamps, stop lamps, and turn signals. They’re also difficult for other motorists to see.”
On a webpage titled “New and Alternative Vehicles”, Ontario Transportation writes that: “Pocket bikes are meant for closed circuit use only, not public roadways. These bikes can be imported as “restricted-use motorcycles.” However, in order to comply with federal standards, pocket bikes require 17-digit vehicle identification numbers, reflectors and warning labels that clearly state these bikes are intended for off-road use only.”
Alberta Transportation has a Fact Sheet which explains that pocket bikes are prohibited motor vehicles meaning that they are not permitted on roadways which includes sidewalks along the roadway. They may only be operated on private property.
If your province is not covered in this article, you could contact your provincial or territorial government department of transportation for more information. A list of links is provided here (scroll down to the Provincial Governments section).

I just got a question from a tenant. The landlord replaced all the windows in the rental property, and then gave the tenant a bill for half the cost of the renovations. Seriously.
The tenant doesn’t have to pay the landlord the money. There are some costs that are simply the costs of doing business, and maintaining the property by replacing windows is just one of many costs this landlord is going to run into.\

If the tenant had broken a window because, I don’t know, there was an intense game of indoor baseball going on, then yes, for sure, the landlord could charge the tenant for the repair and replacement of the window. Or the landlord could charge the tenant when the tenant moved, and keep some of the security deposit to cover the cost.
The Residential Tenancies Act doesn’t actually set out who is responsible for repairs and that’s why sometimes, there is confusion about what repairs the landlord can charge the tenant for, and what repairs the landlord can’t charge for. The common sense approach is that any “big” repairs are the landlord’s responsibility and “teeny tiny” repairs are the tenant’s responsibility. So, while the tenant can change the lightbulb, it’s the landlord that installs the new light fixtures when the old ones break.
There is also the Minimum Housing and Health Standards that can help us to decide who should pay for repairs. One of the landlord’s responsibilities is to make sure that the rental property meets these standards. The standards set out that the windows must be in good repair, free of cracks and weatherproof. So, if the windows in the property do not meet this standard, then it’s the landlord’s job to make sure that the windows get repaired or replaced. If the property is not being maintained, then the tenant can call Environmental Public Health and talk to an inspector about the problem that they’re having with the rental.
What should the tenant do? The tenant should tell the landlord, in writing, that they are not going to pay for the windows. The tenant could put in reasons why they aren’t paying (and while it might be tempting to write that you aren’t paying because the charge is ridiculous, it’s probably better to refrain). Hopefully the landlord will just go away at this point. If the landlord still insists on being paid, then there are three ways the landlord may react.

Question of the month from the Garvie Reading Room:
I had over one hundred loonies in my money jar. I rolled them up and took them to the grocery store. I tried to pay my $100 grocery bill with the loonies, but the cashier wouldn’t let me pay with them. The store manager said that he didn’t have to accept the coins for my purchase. Is that true? My friends say, “Of course you can pay with loonies. They’re legal tender in Canada!”

The law in Canada (specifically the Currency Act) does say that coins issued under the Royal Canadian Mint Act (such as our $1 coins which we affectionately call loonies) are legal tender in payment for purchases. However, the Currency Act also says that there are limits in how many coins you can use in one transaction. Section 8(2) says:

“A payment in coins referred to in subsection (1) is a legal tender for no more than the following amounts for the following denominations of coins:

(a) forty dollars if the denomination is two dollars or greater but does not exceed ten dollars;

(b) twenty-five dollars if the denomination is one dollar;

(c) ten dollars if the denomination is ten cents or greater but less than one dollar;

(d) five dollars if the denomination is five cents; and

(e) twenty-five cents if the denomination is one cent.”

This means that you can’t actually take a hundred loonies to pay for your $100 worth of groceries.
The Currency Act goes on to spell out in section 8(3) that more than one purchase from the same place in one day is considered to be one total amount for the purpose of these limitations. So you cannot try to get clever and divide your $100 purchase into four $25 purchases so you can pay each with your loonies!
That leaves all of us spending our coins a little at a time, or going to the bank to trade them for bills.
You can learn more about the making, use and collection of coins from the Royal Canadian Mint website.

Question of the month from the Garvie Reading Room:


Is it against the law to burn or otherwise damage Canadian currency?
Canadian currency consists of both coins and bank notes (the proper name for paper money), and the law treats coins differently from bank notes.
The law for coins is quite specifically spelled out in the Currency Act (R.S.C., 1985, c. C-52) Section 11 (1):

“No person shall, except in accordance with a licence granted by the Minister, melt down, break up or use otherwise than as currency any coin that is current and legal tender in Canada.”

This Act also spells out the penalties for doing so. As if that was not enough, the Criminal Code of Canada (R.S.C., 1985, c. C-46) also has a relevant section:

(a) defaces a current coin, or

(b) utters a current coin that has been defaced,

is guilty of an offence punishable on summary conviction.

(By the way, isn’t this an interesting use of “utters”? In this particular section, “utters” means to use for payment or to sell.)
The law regarding bank notes is very different.  Neither the Bank Act nor the Criminal Code says anything about mutilation or defacement of bank notes. Before you start scribbling on those twenties in your wallet (or burning them up for that matter), there are some important reasons why you should not damage bank notes. Writing on bank notes may interfere with the security features. As well, damage reduces the lifespan of the notes, which increases costs because then they have to be replaced more frequently. Markings on notes may also prevent them from being accepted in transactions. Furthermore, it is generally thought that marking or damaging bank notes is inappropriate because Canadian paper money is a symbol of our country and source of national pride.
The production of bank notes is one of the main roles of the Bank of Canada. If you do encounter damaged or mutilated bank notes, a free redemption service is offered.
In the end, how many of us actually have “money to burn”?

Photos by Caitlin Thompson at  http://www.flickr.com/photos/kittycanuck/